Cortado offers you a 30-day test period, which should be used to configure the soft­ware to the specific requirements of your IT environment and test its function. For this purpose, use either the integrated demo license key or your previously purchased productive license key.
License keys are already integrated into the Cortado software, so that you can install and test them immediately. In this case, select Demo Mode during initial setup (arrow in illus.). 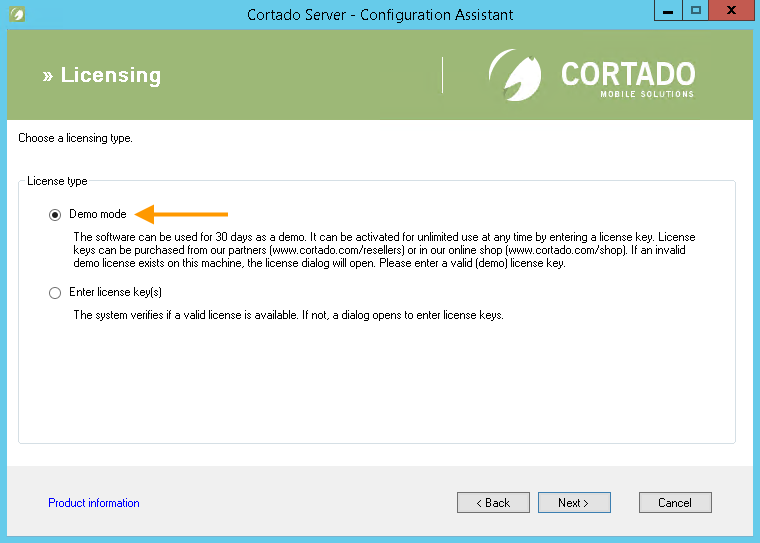 Demo license keys are fully functional for 30 days but cannot be activated.

Once you have completed testing the software, you can purchase a full version from your Cortado reseller or distributor. It is not necessary to uninstall the demo soft­ware version and its license key(s).

Note! Demo license keys haven’t got to be deleted from License Manager. The system applies the more valuable license automatically.

Two license keys, valid for 30 days, have been installed. These comprise a basic license (THCB-…) and a user license (THCU-0816-5-TEST…). The value in the third block of the user license shows the number of possible users (i.e. 5 users, arrow in illus.). The word TEST in the fourth block of the license indicates that it is a demo license.

If you have already purchased a Productive license keys license key, enter this during the installation. To do so, select the mode Enter license key(s) (see illus.). When using Cortado Server, proceed as described here.

If you have already installed the software as a demo version and now wish to install the productive license/s without reinstalling the software, simply open License Manager on the Cortado server.

Note! The License Manager offers the possibility of destroying license keys. Be aware however, that once license keys have been destroyed they can not be reentered – not even if they had been previously activated.

After configuration and trial period, the license can be activated to allow its use with­out time restriction.