Status of the licenses

The advantages of the License Manager 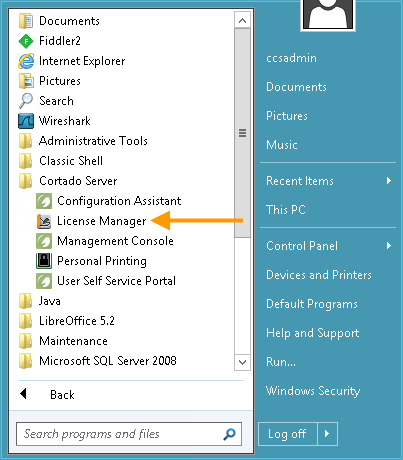 License Manager can be opened in the Microsoft Management Console (MMC).

There are two different types of license:

The annual license (TLCU) is valid for one year. After that, a new license must be purchased. The value in the third block shows the number of possible users.

Example for an annual license with 10 users (Cortado Server):

Perpetual licenses are valid for an unlimited time after activation. However, an update to a higher software version is only possible with a valid subscription (see the section Update subscription). For Cortado Server you always need two licenses, a basic license (THCB) and a user license (THCU). The value in the third block of the user license shows the number of possible users.

Status of the licenses

Moreover, the different colors of the icons show you immediately which license keys are valid and which not. The color shows the status of the license. An exclamation point next to the key shows four weeks before expiration that the sub­scription (update permission) will expire.

The advantages of the License Manager

Note! License Manager offers the possibility to remove or destroy license keys. Be aware however, that once license keys have been destroyed they can not be reentered on the same machine – not even if they had been previously acti­vated. Only use this option in the License Manager, if you wish to delete licenses irrevocably on this machine.